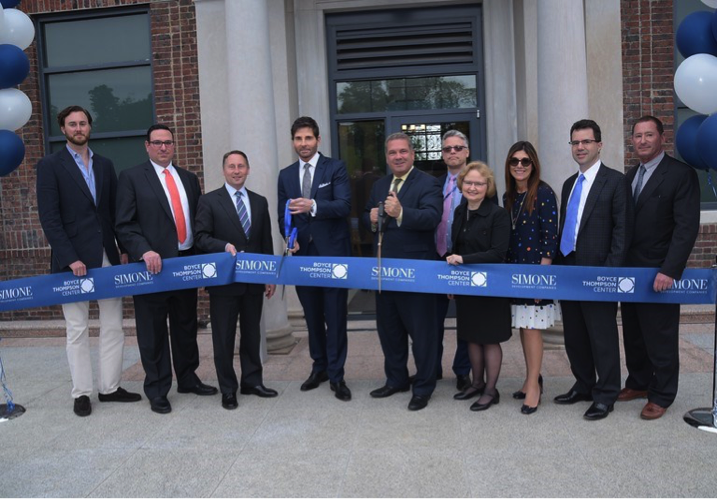 “The grand opening celebration represented an important milestone for Simone Development and the City of Yonkers. What was once an eyesore will now be generating tax revenue for the City, creating jobs and bringing new retail and healthcare services to the residents of Yonkers and nearby Rivertown communities. We are especially pleased to be preserving an important piece of history for Yonkers and Westchester County,” said Joseph Simone, President of Simone Development Companies, the developer of the $35 million project.

“There is such a tremendous sense of pride and renewal felt by the City as we breathe new life into Boyce Thompson,” said Yonkers Mayor Mike Spano. “With the vision and commitment of Simone Development, we have been able to turn a symbol of long-stalled development into a historic and authentic economic driver that will build upon the momentum that’s happening in Yonkers right now.”

Built in the 1920s, the property was acquired by Simone Development two years ago which meticulously restored the main building to its original character with a glorious new plaza and fountain.

A new 20,000-square-foot addition was constructed at the southern end of the main building with an architectural style resembling the historic building. WESTMED Medical Group is leasing the entire structure. In addition to the services of OB/GYNs, perinatology and family medicine, WESTMED will offer on-site diagnostic imaging, perinatology and Urgent Care—all under one roof. Imaging services will include 2D/3D mammography, X-rays for adults and pediatrics and ultrasound for high-risk Maternal Fetal Medicine and breast imaging needs.

In addition to St. John’s and WESTMED, other healthcare tenants include Westchester Gastroenterology, Juvanni Med Spa and Family Wellness Pharmacy. Retail tenants include Tompkins Mahopac Bank, PLUSHBLOW Salon, Ultimate Spectacle and The Taco Project. Fortina, one of the region’s hottest restaurants, has leased the entire wing on the northern end of the main building. Led by celebrity chef Christian Petroni, Fortina is scheduled to open next month.

Guy Leibler, President of Simone Healthcare Development, said the adaptive repurposing of the Boyce Thompson Center provided the company with a unique development opportunity. “Not only are we restoring an important historic building, we are also creating a mixed-use development that incorporates state-of-the-art medical space with retail, restaurants and other services,” he said. “As healthcare becomes more consumer-driven, facilities such as the Boyce Thompson Center will become more attractive to medical practices and ambulatory care facilities that want to be located in an environment that offers patients and employees easy access to retail stores, restaurants and free parking,” he added.

In addition to preserving the classic architectural style of the main building, Simone Development is also honoring the building’s legacy as a plant research center. This week Simone is hosting a reception at the center for officials from the Boyce Thompson Institute which is now located in Ithaca, NY. Vintage photos of the institute in the 1920s are on permanent display in the main building.

About Simone Development Companies
Simone Development Companies is a full-service real estate investment company specializing in the acquisition and development of office, retail, industrial and residential properties in the New York tristate area. Headquartered in the Bronx, the privately held company owns and manages more than 5 million square feet of property in the Bronx, Westchester County, Queens, Long Island and Connecticut. The company’s portfolio includes more than 100 properties and ranges from multi-building office parks to retail and industrial space. The company’s largest and most successful development is the 42-acre Hutchinson Metro Center office complex located directly off the Hutchinson River Parkway in the Pelham Bay section of the Bronx. The first two phases of the complex, which comprise nearly 750,000 square feet of Class A office and medical space, are fully leased. Two additional phases totaling 650,000 square feet (370,000-square-foot Metro Center Atrium and 280,000-square-foot Tower Two), are completed and fully leased. Visit www.simdev.com