Homage to the Past 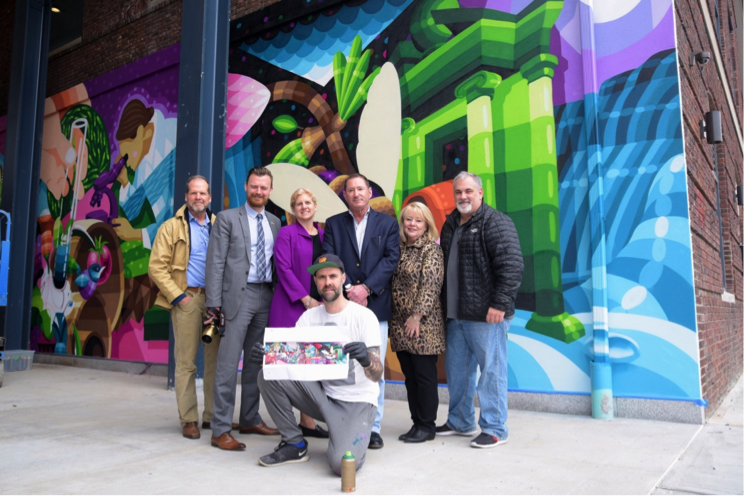 Simone Development Companies, the developer of the Boyce Thompson Center, commissioned internationally-known Dutch street artist Eelco van den Berg to design and paint a dynamic mural for the southeast lower wall of the main building. The graffiti-inspired public art design – which covers a 53-foot by 15-foot wall area – was created through a collaborative effort of the artist, the Boyce Thompson Institute of Ithaca, NY and Simone’s Boyce Thompson Center design team. The bold and colorful design features a combination of images depicting plant life, insects, birds and scientific research.

“We truly are honored to have such a renowned artist create this exciting new mural that vividly captures the rich history of this important Yonkers landmark building,” said Guy Leibler, President of Simone Healthcare Development.

Van den Berg’s murals have graced walls in the Netherlands, Belgium, Germany and in several U.S. cities including Brooklyn and most recently Chicago. This is his second mural in Yonkers. Last year he completed a mural at 41 N. Broadway above the new daylighted portion of the Saw Mill River at Mill Street.

Built in the 1920s, the main building at the Boyce Thompson Center once served as the home of the Boyce Thompson Institute, a renowned horticultural research center. After the institute became affiliated with Cornell University and moved to Ithaca in the mid-1970s, the building sat abandoned and deteriorating, its walls covered in graffiti, greenhouses in ruins and grounds overgrown.

In 2015, Simone Development Companies, a leading developer of commercial and retail space in the tri-state region, acquired the six-acre site located at North Broadway and Executive Boulevard. The historic main building has been meticulously restored to its original character and transformed into an 85,000-square-foot mixed-use center featuring premier office/medical space, retail stores, restaurants and banking.

A new 20,000-square-foot addition has been constructed at the south side of the main building with an architectural style resembling the historic building. WESTMED Medical Group is leasing the entire new structure. On the northern end of the site, a new two-level, freestanding building has been constructed at the corner of Executive Boulevard and Executive Plaza and is leased to St. John’s Riverside Hospital. The $35 million Boyce Thompson Center project began construction in 2015 and is scheduled to open next month.

About Simone Development Companies
Simone Development Companies is a full-service real estate investment company specializing in the acquisition and development of office, retail, industrial and residential properties in the New York tristate area. Headquartered in the Bronx, the privately held company owns and manages more than 5 million square feet of property in the Bronx, Westchester County, Queens, Long Island and Connecticut. The company’s portfolio includes more than 100 properties and ranges from multi-building office parks to retail and industrial space. The company’s largest and most successful development is the 42-acre Hutchinson Metro Center office complex located directly off the Hutchinson River Parkway in the Pelham Bay section of the Bronx. The first two phases of the complex, which comprise nearly 750,000 square feet of Class A office and medical space, are fully leased. Two additional phases totaling 650,000 square feet (370,000-square-foot Metro Center Atrium and 280,000-square-foot Tower Two), are completed and fully leased.